There were only two White WRs drafted in 2022, but they both landed in good places and may even avoid the dreaded racial apprenticeships that so many are made to suffer through before getting substantial playing time, the few that do eventually get opportunities that is.

The Colts' selection of Alec Pierce in the second round has been met with mostly positive reviews and he has a good chance to start as a rookie outside opposite of Michael Pittman, who isn't as fast as Pierce.

After trading A. J. Brown to the Eagles the Titans are currently very weak at receiver. They signed Julio Jones last year but he turned out to be totally washed up. They drafted Treylon Burks in the first round last month to "replace" Brown, but who knows if he will be anywhere near as good as Brown, who himself is injury prone.

Kyle Philips has a good chance to play as a rookie as Tennessee's slot receiver. Ryan Tannehill is under the gun after the team drafted Malik Willis, and he should love a smart, shifty receiver like Philips if Philips is allowed to play. I'm sure Philips could play outside too, but let's not get carried away as after all this is the NFL we're talking about.

Here are some of Philips' highlights:

Optimistic for Phillips! Should slot into that Adam Humphries role in the slot. Hope him and Tannehill can develop some chemistry.

"I have faith in the White man." My Aunt Agnes

With Burks already showing telltale signs of being a bust, the Titans would be supreme fools if they force Philips to undergo a racial apprenticeship. To use a phrase that's usually applied only to Blacks and often turns out to be comically wrong, Philips is "NFL ready."

This is the current Titans depth chart at WR: Besides the out of shape and easily gassed Burks, they have Nick Westbrook-Ikhine, Robert Woods (coming off a torn ACL), Dez Fitzpatrick (who did nothing as a rookie last year), and the legendary Racey McMath. What a bunch of hot garbage. Hopefully Austin Hooper will provide some help at TE. If they don't use Philips as a rookie, Ryan Tannehill is likely finished as the starter as the cries will quickly mount for him to be replaced at QB by super-upsider Willis.
American Freedom News
https://americanfreedomnews.us/

That Titans room is stacked! Ha! Too bad they didn't sign another pale face as a UDFA.

Bucky said:
That Titans room is stacked! Ha! Too bad they didn't sign another pale face as a UDFA.
Click to expand...

Lol. They should try to add Laquan Treadwell.
"I have faith in the White man." My Aunt Agnes

Philips is a tremendous punt returner. He averaged 19.3 yards per return in college.

The Titans got a steal in the 5th round.
"I have faith in the White man." My Aunt Agnes

Here Philips jukes 2 defensive backs out of their cleats. One of them (number 7) is Derek Stingley, who was drafted number 3 overall in the 2022 draft.

"I have faith in the White man." My Aunt Agnes

Kyle Philips reminds me of a poor mans Wes Welker. I'm not saying he is going to have a great career like Welker but he is capable of being a starter on more than just special teams. I hate it even when our guys just get stuck
as a punt or kickoff returner. Don't get me wrong. It's better than the bench or being cut but these same types of players have the ability to start as outside receivers. The one thing we need alot more of. Tbat being said let's see
how it plays out in training camp for Kyle Phillips. I gonna miss him in the Pac 12 as I watch alot of west coast college football and especially teh Pac 12.

Philips and Alec Pierce both have a good chance to start as rookies, bypassing racial apprenticeships if that does indeed happen, which would be miraculous for the NFL. The Titans need help at WR and their first round draft pick is already showing signs of being a bust, and with A. J. Brown traded to the Eagles, they're in bad shape at the position.

Philips should be used as a slot machine. There's no question he can split out wide as well but I haven't read anything yet indicating the Titans will use him that way. Even if he just plays the slot he should be very good and possibly even their best receiver this season as I expect Ryan Tannehill to establish a strong connection with Kyle due to his talent and reliability.
American Freedom News
https://americanfreedomnews.us/

I've been waiting for some positive news on Kyle and here it is. And just as predicted he's gaining Ryan Tannehill's trust on a team with otherwise weak receivers, including their wheezing first round draft pick who can't run 40 yards without becoming exhausted. Go to the link as it has two sweet short videos showcasing Phillips' great quickness and elusiveness and also a short interview with him:

Tennessee Titans rookie wide receiver Kyle Philips has been a pleasant surprise, making a splash ever since he stepped onto the field for his first NFL practice.

Philips, a former UCLA Bruin and 5th round selection by the Titans in the 2022 NFL Draft, has a real chance to impact the Titans offense as a rookie and fill a role that has been missing for a long time. As a quick and crafty route-runner in the slot, Philips provides a nice change of pace from fellow rookie Treylon Burks (a physical wide out), or even veteran Robert Woods. . .Philips’ craftiness has slowly been gaining him more opportunity with the first team offense, and slowly earned him the trust of starting quarterback Ryan Tannehill.

If Kyle Philips lives up to his talent the local bars will be serving alot of "Philips Screwdrivers".

Good to see him in a short interview. The kid is jacked for a receiver. I like how he said at the end he loves competition and wants to cmpete against the best. I have a good feeling about Kyle Philips. Like with most
of our guys on offense or defense, he just needs reps in games. Sitting on the bench doesn't help anyone get better. It's about learning on the go and adjusting to the faster speed and alot bigger playbook to learn.

Good landing spot for Kyle Phillips. “Crafty” sounds like caste speak, for sure. I would reserve that adjective for a veteran that’s lost a step, but still gets open based on their experience and guile. Without checking the numbers, I will assume that Kyle has elite athleticism and quickness to go along with his “craftiness.”

TitanInsider.com's Terry McCormick reports fifth-round WR Kyle Philips has been getting reps with the first-team offense as the slot receiver. The Titans have one of the weakest wideout rooms in the league, and things are wide open behind veteran trade pickup Robert Woods. First-rounder Treylon Burks has had a better summer than spring when he missed a bunch of time with conditioning issues, but snaps and targets are still up for grabs. Philips was a slot machine at UCLA and showed short-area burst with his shuttle and three-cone times at the Combine. Titans WRs coach Rob Moore said Philips has "earned" his reps with the starters. Nick Westbrook-Ihkine and sophomores Racey McMath and Dez Fitzpatrick are among the other Tennessee receivers competing for snaps.
American Freedom News
https://americanfreedomnews.us/

Typical moronic "analysis" by RotoWire. Apparently they figure Tannehill and the Titans will be so run heavy that even if Philips excels it would take "a lot to go wrong" for him to get more than a paltry 3 or 4 targets per game. And Derrick Henry will then get what, 800 or 900 carries? It doesn't work that way in today's pass oriented NFL, but the Titans have a White QB and a (possible) rookie White slot receiver, so dire and ridiculous predictions are par for the course.

(RotoWire) Philips has been getting work on the first-team offense, with WRs coach Rob Moore noting Thursday that the rookie has "made some plays" and "immersed himself in the playbook,", Buck Reising of 104.5 The Zone reports.
Analysis: Terry McCormick of TitanInsider.com reported Tuesday that Philips was beginning to get some slot work with the first unit. He's off to a great start at training camp, by all accounts, but it's hard to see the fantasy upside for a rookie fifth-round pick slot specialist in a run-first offense with a mid-range starting quarterback. A lot would need to go wrong for the Titans for Philips to see more than 3-4 targets per game.
American Freedom News
https://americanfreedomnews.us/

Dynasty Analysis Philips has been seeing a lot of time with the first team offense and the Titans have one of the worst depth charts after moving on from both Corey Davis and AJ Brown. There's a solid runway here for Philips, who has been taking advantage thus far. Philips is found all the way down at #52 in our rookie rankings, but he's going to rise quickly should his strong camp continue.
American Freedom News
https://americanfreedomnews.us/

The news continues to all be good:

And the Titans are seeing that first hand in practice, as one unnamed member of the team admitted to ESPN’s Jeremy Fowler that the defense hasn’t been able to figure out how to cover Philips in practice yet.

Someone with the Titans told me this about Kyle Phillips, a fifth-round receiver out of UCLA: “We haven’t quite figured out a way to cover him yet.” Phillips is very quick out of the slot and is earning some first-team looks with his play. Tennessee wants him to be a little quicker with his decision-making, but that will come.

As if we needed another reason to be excited about the UCLA product.

The rookie has not only been impressing with his individual play in camp, he also seems to be developing a really good chemistry with quarterback Ryan Tannehill, who is trusting Philips early on.

Titans might have a gem in rookie WR Kyle Phillips​ 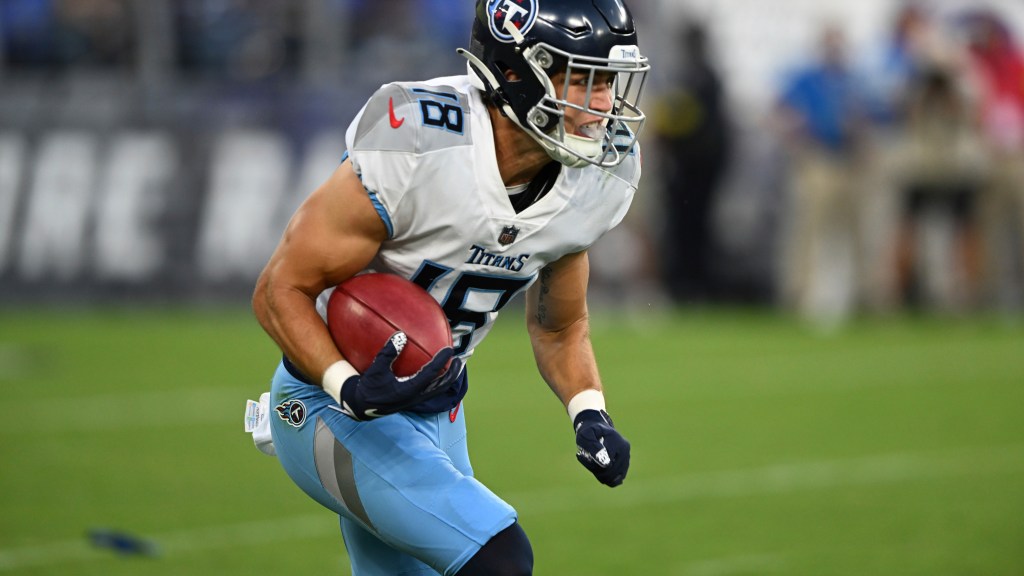 Titans might have a gem in rookie WR Kyle Phillips

The Tennessee Titans spent their first-round pick on a wide receiver, but may have landed a steal of a sleeper in the fifth round

draftwire.usatoday.com
American Freedom News
https://americanfreedomnews.us/
You must log in or register to reply here.