Is there a chance of a USA-Russia war in the near future? 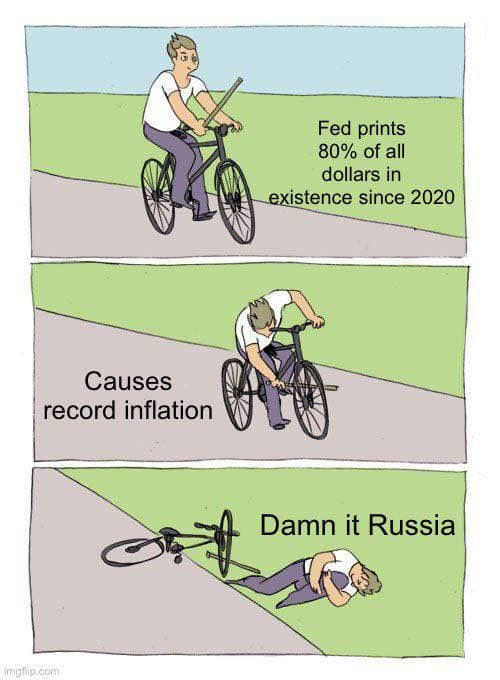 A few here, and half of America, have not only been watching a movie all their life, but have slept through that movie and only been watching the commercials...
Last edited: Mar 9, 2022
"The things that threatened me ne'er looked but on my back.
When they shall see the face of Caesar, they are vanishèd."

Don Wassall said:
UFC fighter Bryce Mitchell was on Tucker Carlson's show tonight and he was fantastic!! I admire this young man so much. Please invest five minutes and 25 seconds and watch this:

Great kid. Got me fired up watching it.
F

No the US would never lie. Just like the chemical and nuclear weapons in Iraq. This is impossible. Russia is bad. We are good and wholesome.

I love this country and always will but hate what it's become. We the people must retake our country back. It's been hijacked for many decades now!

Don Wassall said:
UFC fighter Bryce Mitchell was on Tucker Carlson's show tonight and he was fantastic!! I admire this young man so much. Please invest five minutes and 25 seconds and watch this:

I love this kid's down-to-earth and tell it like it is approach! He's a real inspiration!

Great meme! Somebody should have that on a block long mural in Washington DC!


white lightning said:
No the US would never lie. Just like the chemical and nuclear weapons in Iraq. This is impossible. Russia is bad. We are good and wholesome.

I love this country and always will but hate what it's become. We the people must retake our country back. It's been hijacked for many decades now!
Click to expand...

Amen White Lightning. You are absolutely correct. I love this country but I despise what it has become because of the despicable elites and string pullers in it. As far as I'm concerned this is not America anymore. It's an absolute joke and it needs to be taken back from these satanists. One thing is, we need to believe that it actually can be. We don't need to be hopeless. We need to be positive and believe that the wicked shall fall just like the Bible says. And being realistic I know it could take quite a while, and I can be feeling very negative and almost despondent in this massive cultural and internal Civil War but I believe we are still going to win in the end and my daughter and her children's children can grow up in an America that at least has a semblance to what we grew up in. Call it wishful thinking but I'm trying to take it as positive as I can.
"He that believes on Me has everlasting life." - Jesus Christ (John 6:47)

It's almost impossible to know the war situation as the media and governments all lie 24/7. The media all around the world has been PRO UKRAINE and
ANTI RUSSIA reading from Que Cards just like the Covid Scamdemic a.k.a. Plandemic. It's so fake and all of the bad actors. The media has used footage
from previous wars and video games along with many other things to ramp up the fear of the public. Here is another example of fake dead bodies.

WL,
Go check the link in the comments on that video and go to the youtube link. It's some stupid lefties who are "demonstrating in protest".
"He that believes on Me has everlasting life." - Jesus Christ (John 6:47)

Non stop fake propaganda about the Ukraine/Russia Situation. The media is so evil to push lie after lie all for the love of money.

Here is some additional information on the “real” nazi’s in the Ukraine.

The United States has been arming and training far-right militants. These Ukrainian storm troopers are among the most vicious and malignant combatants Washington has ever employed to implement its foreign policy agenda. Naturally, Washington sees these fascist-zealots as mere pawns in its proxy war on Russia.

“Ukraine really does have a far-right problem, and it’s not a fiction of Kremlin propaganda. And it’s well past time to talk about it,” explained journalist and expert on the Ukrainian far right, Michael Colborne.

The most known neo-Nazi group on Ukraine’s far right is the Azov movement. The movement grew out of the Azov Regiment (originally a Battalion), formed in the chaos of war in early 2014.

It was formed by a “ragtag group of far-right thugs, football hooligans and international hangers-on, including dozens of Russian citizens,” said Colborne, who wrote a book on the movement.”(“Can Ukraine have a ‘Nazi problem’ with a Jewish president?”, Jewish Unpacked)

“Since the Western-backed coup in Kiev in 2014, political organizations associated with neo-Nazis infiltrated Ukrainian mainstream politics as the Ukrainian government sent troops to try to crush the Donbass uprisings by force.

“Azov took part in subsequent hostilities in Donbass and was incorporated into the National Guard of Ukraine in November 2014, although its members continued to wear neo-Nazi and SS-like symbols and regalia and openly express neo-Nazi views. Their logo echoes the Wolfsangel, one of the original symbols used by the 2nd SS Panzer Division.

Again, these are not your garden-variety, right-wing militants. These are full-fledged, battle-hardened Nazi storm troopers that have engaged in all-manner of illegal and sadistic activities including “the mass killing of prisoners, the concealment of corpses in mass graves and the systematic use of physical and psychological torture techniques.” And while they are lavishly supported by the United States, they oppose everything that America claims to stand for.

In March 2015, Ukrainian Interior Minister Arsen Avakov announced that the Azov Battalion would be one of the first units to be trained by US Army troops, as part of their Operation Fearless Guard training mission. … “We have been training these guys for eight years now. They are really good fighters. That’s where the Agency’s program could have a serious impact.”

The plan to defeat Russia was never intended to succeed in the initial phase of the conflict, but to lay the groundwork for a bloody and protracted insurgency fought by these same CIA-trained paramilitaries who now act as Uncle Sam’s Nazi warriors.Here’s the story from Yahoo News:

“The CIA is overseeing a secret intensive training program in the U.S. for elite Ukrainian special operations forces and other intelligence personnel, according to five former intelligence and national security officials familiar with the initiative. The program, which started in 2015, is based at an undisclosed facility in the Southern U.S., according to some of those officials….
jaxvid rebooted

Zelensky himself is neither Russian, or Polish, he’s Jewish.

Ukraine is a phoney ‘shadow country’ created to commit and profit from crime.

Video to watch here, got taken down from YouTube:

We are all here to reeducate. All we are hearing is lies from everywhere so we have to look at everything outside the box.

Oh no. We must work with the Ukraine to keep the Ruskies from finding out what we have been doing for over a decade.

Many, many Ukrainians are welcoming the Russians. They are tired of living under a corrupt government. From a reporter from the Ukraine.

Russia is attacking Ukraine to remove its ties to the west.
But this is causing the West to remove their ties to Russia, which means Russia's economy will be severely impacted.
So I think this will be Putin's Waterloo.
He will win Ukraine, but destroy Russia and fall from power in the process.
Last edited: Mar 10, 2022

jacknyc said:
Russia is attacking Ukraine to remove its ties to the west.
But this is causing the West to remove their ties to Russia, which means their economy will be severely impacted.
So I think this will be Putin's Waterloo.
He will win Ukraine, but will fall from power and destroy Russia in the process.
Click to expand...

Great post jacknyc. Putin may fall but I doubt it. The rising gas prices are making him richer by the day. Also the rising wheat prices as Russia is one of the biggest
exporters of wheat. They also are one of the biggest fertilizer producers around. They are imposing sanctions back on us and the commodities will sky rocket! I think this is going to hurt America more than anything? Russia is paying arond 2.00 a gallon. Look what were paying.This is the fall of Babylon(America).

Pres. Biden is doing everything he can to destroy our country but making every stategic decision that ends up hurting us more than any other country.

In case you guys haven't noticed this whole war is to bring cover for the worldwide economic collapse. Wish I was wrong but it's coming fast and hard. Please guys
try to have extra food, water, etc. and prepare for the worst. I think I might buy an electric bike as everything is going nuts. Scary times but that's why I trust in God.
I hope all of us here get through this as in my honest opinion the worlds governments, media, hospitals, stores and tech companies are all at war with humanity!

We are paying 20 mil a day for Russian Oil, while we sent 350mil to the Ukrainian's to fight Evil Russia. Talk about funding both sides.

*Wake up to read that now Congress wants to send 14 Billion to Ukraine,lmao.

Imagine that a foreign power invaded the USA. Would you stand and fight or flee the country?

Say this foreign power declared that they wanted to depose your ZOG sham government, partition a few states to make them independent entities, decentralize your standing industrial monopolies, and leave you alone? 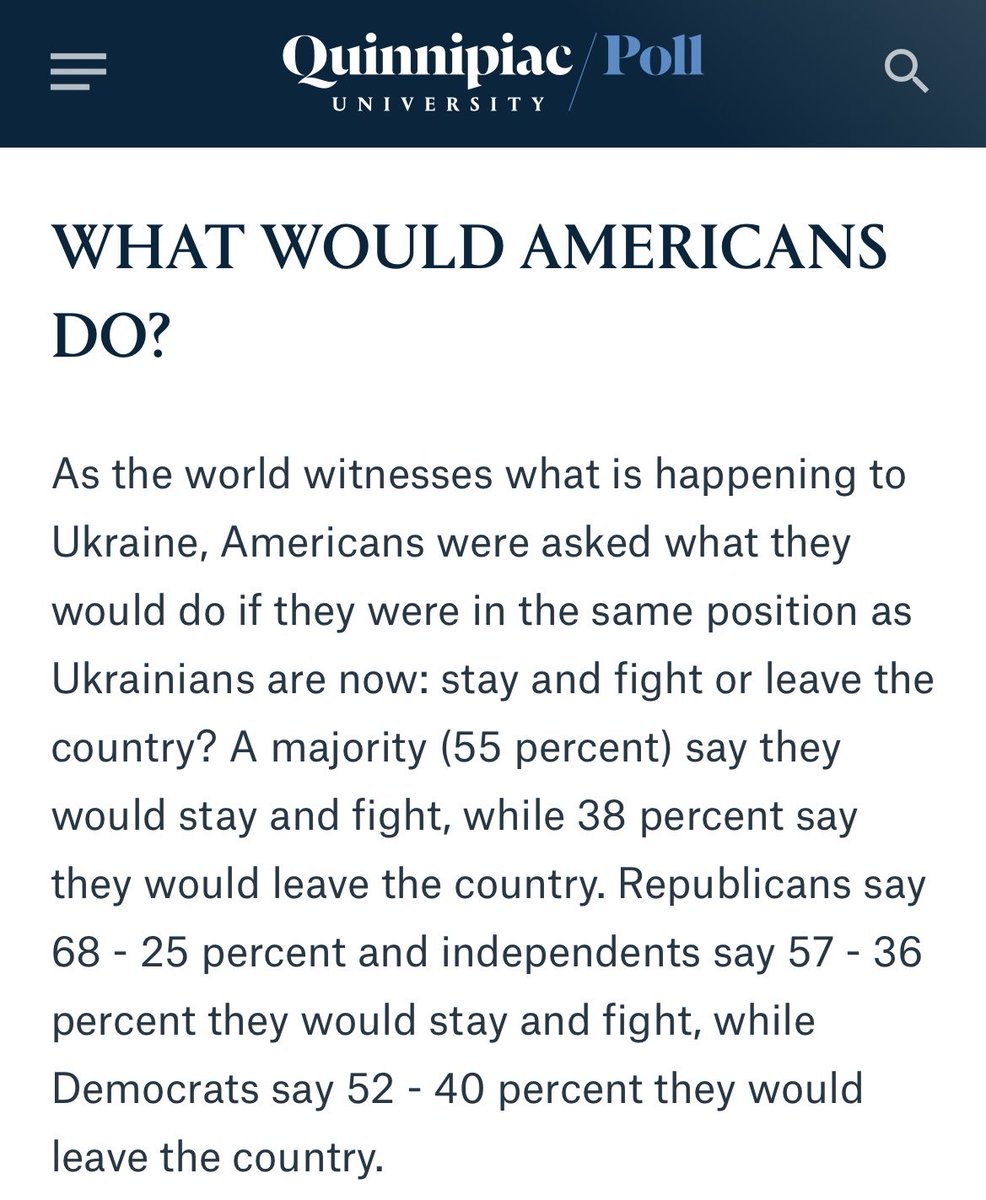 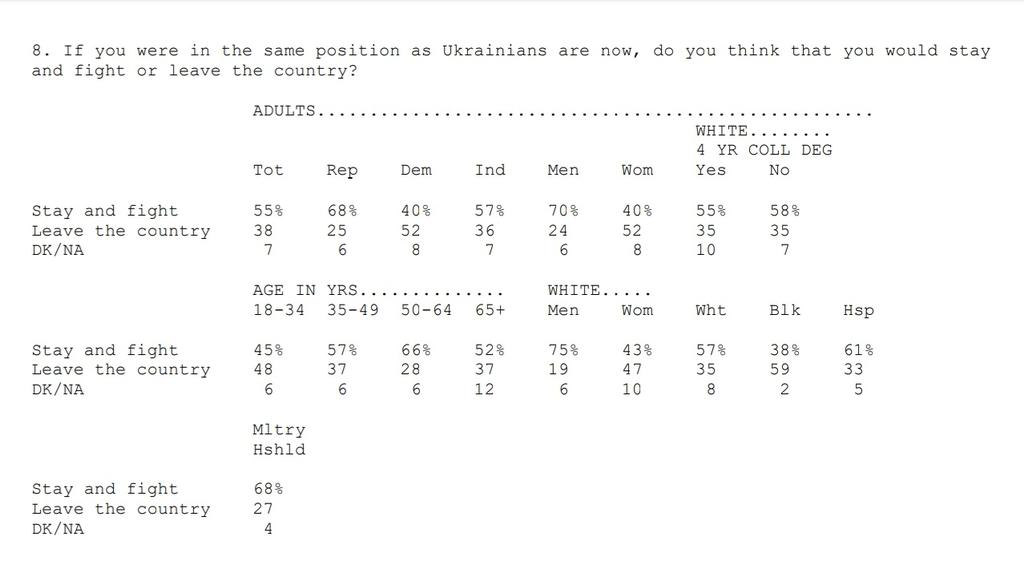 Plenty of white men willing to fight. This poll question lacks any nuance - I'm disappointed there's no 'option C,' since that's the real crux of the matter. In my hypothetical, I think the foreign power is offering a pretty sweet deal!

I don’t understand why so many people are leaving the Ukraine. Other then a current risk over the next few weeks of collateral damage from the war how bad will it be with a new government. The old one sucks, they all agree on that. It’s not like the Russians are going to genocide them. The Ukrainians are very similar to Russians. How is it better to be a refugee in another country?
jaxvid rebooted

Flint said:
I don’t understand why so many people are leaving the Ukraine. Other then a current risk over the next few weeks of collateral damage from the war how bad will it be with a new government. The old one sucks, they all agree on that. It’s not like the Russians are going to genocide them. The Ukrainians are very similar to Russians. How is it better to be a refugee in another country?
Click to expand...

You gotta be kidding me, this is what Ukrainian cities will become soon..
Good news this sites favorite volunteer is still alive but a few lads have died in combat the battle for Kyiv is going to be a meat grinder and it might have a Stalingrad type siege if the Ukrainians can hold for long. They reportedly made the massed armored vehicle convey scatter after taking heavy fire. ttps://www.dailymail.co.uk/news/article-10569039/Ex-British-soldier-Shaun-Pinner-says-chaos-line-Ukraine-Russian-conflict.html
Last edited: Mar 11, 2022

We are seeing the end game agenda for the N.W.O. If you want to know the truth then watch this video. All sides are controlled and always have been. This
is their time and they are going for broke. It says in the Bible they will be successful for a short time. Get right with who created you as many of us are not going
to make it through this. The truth hurts but it sets you free. People need to know what's coming.

https://www.bitchute.com/video/khrGi1HgbLKl/
You must log in or register to reply here.