How many chicken wings can you guys eat?

Very often I head to my local pub on Wednesdays to take advantage of 0.25 $ wing night. I usually take 1 beer with it (Only because its kind of required with the wing special, but I dont enjoy drinking alcohol and often dont even finish).

Sometimes I feel like I have a big appetite and my friends and family always comment that I eat a lot. I am 5'9" 160 pounds and I typically stop at 50 wings literally. 35 or 40 is where I start feeling full and the last 10 I slowly eat after a small break.

Is this abnormal or unhealthy? Other guys who are even bigger than me tell me theyre full at 20? Even when I go to McDonalds (not very often) I need to eat like 2 or 3 or 4 double 1/4 pounders to get full. When I go to Subway for lunch I get chicken with double meat (costs me 15 $) and it doesnt satisfy me for the day. Its almost never that I can eat a normal meal at a restaurant and feel full. Im usually hungry within an hour.

I should also state that Im in very good shape and I never gain weight no matter how much I eat. I would say I am slim.

You're very lucky to have a metabolism that lets you eat that amount of food and not gain weight. But it will change eventually, it does for everyone, usually around the late 20s or early 30s.

You may want to try slowly eating less over time, because if you keep eating like that after your metabolism slows down, you will start packing on the weight.

I have a good appetite but have never tested myself to see how many wings I can eat. I used to go to Ponderosa and pig out on their all you can eat buffet a lot and down a bunch of wings, but I was also eating other food too. I'm 5' 10" and 175 lbs.
American Freedom News
https://americanfreedomnews.us/

You might be a good candidate for the World famous "Nathan's" Hot dog eating contest in Coney Island, New York. The most famous contestant in the long history of that contest was a small skinny Japanese fellow who set several records and was champion multiple times. Several other contenders for that glutinous crown have been " where did they stuff it" kinds.
You undoubtedly have a fast metabolism, but the amount you eat may also be enhanced by your chewing habits. If you wolf it down without properly chewing, then a lot of that chicken may be passing along undigested. Another words your stomachs not able to finish digesting what you didn't properly chew, so down and out the poop shoot. Your amount of digestion therefore is less than the 50 wings leading your body's appetite mechanism to think less of your intake.
That's precisely what happens in those above mentioned contests. They swallow, not chew, and later throw up and sh*t a lot of barely digested hot dogs.
Altogether a very unappetizing subject.

I could eat 75-100 wings in one sitting (at 6'8, 300+), BUT I too have a (much) slower metabolism than my days of youth. I 'could' easily knock down an extra large pizza & case of brew, but I wouldn't attempt that feat nowadays. I actually eat fairly average portions (save for rare occasions). My metabolism won't let me "get away" with binge eating anymore. ;-)

I've got a question for you now...

6'-1" at 225 lbs and I can eat about 20 wings without feeling too full. I always stop there but would guess I could handle 30 or so on any given day.
For here we are not afraid to follow truth wherever it may lead... -Thomas Jefferson
M

fernchris55 said:
You might be a good candidate for the World famous "Nathan's" Hot dog eating contest in Coney Island, New York. The most famous contestant in the long history of that contest was a small skinny Japanese fellow who set several records and was champion multiple times. Several other contenders for that glutinous crown have been " where did they stuff it" kinds.
Click to expand...

When Caste Football gets a "Competitive Eating" forum in the Other Sports section we will know the Idiocracy has arrived. It might some day be the last American "sport' not dominated by blacks, though I'm guessing they could do pretty well at a chicken wings eating contest.

Matra2 said:
When Caste Football gets a "Competitive Eating" forum in the Other Sports section we will know the Idiocracy has arrived. It might some day be the last American "sport' not dominated by blacks, though I'm guessing they could do pretty well at a chicken wings eating contest.
Click to expand...

Here's one large one getting his stomach handed to him by jap boy.
One eating contest that the Coons win paws down (with apologies to the "Coon Creek Girls" ) is the sh!t eating contest.

outside of these occasions where you eat a lot of wings or at mcdonalds, do you eat a lot, or more than the other men?
because you can eat a lot in one sitting without getting fat as long as it's only occasional and don't it too often
and your body is saturated pretty quickly in those occasions, you won't be able to use all the food you have ingested and turn it into fat because there is a limit to what the body can assimilate in a short time

Obese people are really shitty competitive eaters. The fat in their guts doesn't start jutting outwards until it's exhausted all space inwards. Similar to how their enlarged hearts reduce their lung capacity.
NFL, go to hell.

I usually take in probably around 4,000 calories a day, most of it being carbohydrates (bread, crackers, noodles, etc.), because I run long distance. If I'm eating junk food I can easily eat a full size bag of chips by myself, or an entire medium pizza (eight slices) alone.

Driving past our local fairgrounds yesterday I saw they're having some sort of eating contest next weekend. All the hungry people in the world and we're engaging in competitive gluttony. That's just flat decadent man. No wonder people hate us. In ancient Rome you had to be upper class to indulge like that but in this great country any average Joe can pay the entry fee and pig out like Nero or whatever and maybe win a prize. How great and screwed up is that? Back in the day I might have thrown my hat in the ring because I could chow with the best of them but since I came down with the Type 2 I've had to cut back and my stomach has shrunk.

I might just go to see what kind of people attend these events. Maybe the people who think tractor pulls and monster truck shows are too high brow?

Yeah, I think I shall attend. I don't know how fine the women will be but I'm guessing there won't be much for competition.
Last edited: May 23, 2016 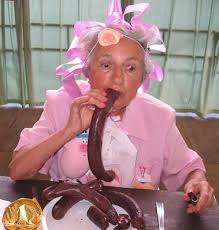 I don't know who you are, clearly some sort of "internet enforcer", or "playground bully", or "wanna-be internet tough guy". You come across like a "Mall Cop". You're awfully rude for someone who has only been here a few months and only has 50 posts, not to mention clearly hasn't donated a single cent to this site. Whatever you want to say about me is fine, but the fact that I have donated several dollars to this site demonstrates that I agree with the principles on some level.

So you're saying I'm a fake, a troll, and my photos and posts are not real, and in reality I'm "an unemployed 50-year-old living in a basement". Even though I've been consistently posting different and new photos of myself for years now, not to mention I've even called in and spoke on Don's radio show when he was doing it.

Very soon, I will be posting videos that also substantiate me. Your comments are ridiculous, "newbie". I am real, I'm not some sort of "troll" or 50 year old Troll posing as the guy in the pics.

Here is another new photo of me, taken very recently, as I said, I'm going to start taking a lot more photos and especially videos very soon. And PS) Just because some people have different views than yourself doesn't make them a troll.
Last edited: May 24, 2016

I don't think BS Specialist a troll...just misguided on a few things. ;-)

Here is a brand spanking new photo of me, very recent (Id say I look very good, kinda like CR7 lol), as well as some other pics of me. It is amazing that I can have such a large appetite but still maintain a good physique. I have one of the biggest appetites I know of, especially when you consider I'm not a very big guy. I am 5'9", 155 to 160 pounds.

I've been doing well in my work lately, just making money and learning my trade so that I have such skilled labour, probably will eventually open my own business. I'm making good money and single, this is the prime of my life. It's fortunate that I can recognize and value my youth and not get trapped in a relationship or a marriage or mortgage like so many other guys my age and a bit older, which is just throwing your life away. I honestly love my life as a single unattached man. I've dated females in the past, but now I value my independence and have shifted my priorities out of what I want out of life. Have a mate flying in from Toronto and we're going to be visiting some prostitutes together, and these are the times of our lives. It's going to be me, him, and 2 prostitutes then afterwards we're going through the Rockies together. Single and loving it.
Last edited: Jul 9, 2016

BoxingSpecialist2 said:
...
What is your height weight and # of wings you can eat in one sitting?
Click to expand...


Holy cow! But if you keep eating like that and your metabolism slows down - which it will - you will blimp up. It happens to a lot of ex athletes.
You must log in or register to reply here.