white lightning said:
I post this to have you guys take a look at that time by Krisztina Makarenko. She ran a 7.15 for the win. That is so damn fast! New name to watch out of Russia.
Click to expand...

She is formerly Kristina Sivkova.
A long time stand out as a junior. Unfortunately, she hasn't been able to have much international competition recently because of the continuing ban on Russia.
Last edited: Feb 18, 2020
J

It's interesting that Russia hasn't turned out any decent male sprinters in decades; but always has good female sprinters.

jacknyc said:
It's interesting that Russia hasn't turned out any decent male sprinters in decades; but always has good female sprinters.
Click to expand...

Even that has dried up beyond 400m runners, when was the last time Russia had a competitive female making major finals and winning medals? Privalova was a superstar and the country had a few medalists in the 200m but that was in the early 2000's and a few of them were caught up in the doping cloud hovering over Russian athletics.

Aside from Shubenkov and the 400m runner that's name escapes me Russian male sprinting has been beyond terrible for a country of it's size.

There was a lot of emotion in that ventilation. There was no limit to the exhilaration of Samuel Purola after a stunning 200m win at Tampere Championship Halls.

A win of 20.85 is only 0.01 seconds from the man's record in the track. It has been nearly three years since the record broke.

Purola's Sunday result is also the second-best Finnish time ever in the hall. Jonathan Åstrand's short track run SE is 20.72. In any case, Purola's quotation is the best ever Finnish score on a long track.

The handsome rumble Oulun Pyrennus runner lifted his hall record by 0.26 seconds during the day.

- Technically a really clean run. I still couldn't hope for such a time, Purola was astonished.

Saturday's 60-meter run, including Purola, will contract four runs this weekend. It's been a while since he last ran so many races for two consecutive days.

- In the morning, I was really tired, and every place was knocking. When I came to the hall, I started playing music. I got that fighting look.

Next, Purola will try to practice such times also outdoors.

Peyton Chadwick 2nd 60m hurdles USA Indoor Champs. When you listen to the negro american announcers they seem to forget about her until the results show on screen. Typical. Sanya Richards Ross has no business being a broadcaster, between her lisp, inability to think quickly and her poor grammar it is excruciating to listen to her. As well she is blatantly racist.

sprintstar said:
Peyton Chadwick 2nd 60m hurdles USA Indoor Champs. When you listen to the negro american announcers they seem to forget about her until the results show on screen. Typical. Sanya Richards Ross has no business being a broadcaster, between her lisp, inability to think quickly and her poor grammar it is excruciating to listen to her. As well she is blatantly racist.
Click to expand...

Yes Ross is mediocre at best and has no obvious broadcast school training, Boldon while sounding polished sounds like he wants perform a sex act on every male sprinter that wins a race, I guess it's death by the poison of your choice.

Carol Lewis(not Carl in drag) was quite good and professional but it seems like she was put out to pasture a few years ago, Dwight Stone keeps on rolling well into in his 60's. Initially the top commentary job of covering US track and field was Bruce Jenner's to have but we saw what his life goals were.....

I too have noticed that if a White sprinter wins a race all of sudden the dork White announcer and Ross or Boldon are fumbling for their notes to look up the runner and their track resume.

This is the youtube.com link to the 2020 Indoor Track Meet going on in Levin right now.

Jan Volko does it again. Another race and another national record. He ran a time of 6.55 today for 3rd place again. His start wasn't as good as usual but the power and very fast
stride turnover he has got him back nicely. My only fear is that they race the kid every week and it's gonna burn him out before the summer. It's an olympic year. Love to see him
compete but his coach & trainer should know it's an olympic year and outdoors is where the true fame is. Either way he is as consistant as they come with his times. It should payoff
outdoors with a few personal bests I hope. I just hope they let his body rest for around a month or so after the indoor season ends.
J

A new name out of Germany, Deniz Almas, won their National Indoor Championships.
6.64 - a decent time. Julian Wagner was 2nd in the same time.
Maybe the new generation of sprinters for Germany.

Germany's fastest indoor sprinter comes from Wolfsburg. Deniz Almas had the best nerves over 60 meters - after two false starts, to which record holder Julian Reus (LAC Erfurt) fell victim ( to the video ). 6.60 seconds meant gold for the 22-year-old surprise man, who was able to increase his best time by seven hundredths. "German champion - I could get used to this title," said Deniz Almas. New, young faces also followed on the other podium finishes, as Silber went to Erfurt to 21-year-old Julian Wagner (LAC Erfurt), who set his best time in 6.64 seconds, in front of 22-year-old Aleksandar Askovic (6.66 sec).

Amy Hunt wins the British Indoor Champs over 60 meters! Wow this is ever sooner than I expected. She is such an incredible find!

In the British Mens 60 meters finals Andrew Robertson won his 2nd british indoor nat'l championship. He ran a winning time of 6.66 for the gold medal. So happy for the guy as he has been around for a decade or so. Very talented. Just never got the proper funding and support that others got. He still has had a very solid career!

Here is the race with Robertson winning his 2nd British Nat'l Championship over 60 meters!

Here is a very nice interview with Andrew Robertson talking about winning the gold medal today and his hopes for making the olympics team this summer.

white lightning said:
Amy Hunt wins the British Indoor Champs over 60 meters! Wow this is ever sooner than I expected. She is such an incredible find!

One to watch. I love it that she is a pure Brit. See below her classic sprint physique.

We have a live track meet currently going on in Australia. The 100 meters finals should be within an hour or so. Browning and Hale are both there. Hoping for wind legal sub 10.10 or sub 10's!

Watched a bit of the meet in NZ, Hale DQ'd for a f/s(he ran under protest) but if you watch closely the fella on his right twitched strongly in his blocks causing Hale to react. Final was not a good result with slow times with a +2.2 wind. In actuality the times were generally slow in most events. Tom Walsh won the Men's SP with a 21.66m put.

Filippo Tortu ran his first indoor race of 2020 and still won the Italian Indoor Championships 60 Meters Gold Medal. Not bad for his first time out his year!

Unfortunately Luca Lai did not compete in the Italian Championships because of an injury.
Too bad, as I am very curious to see how he would have done.
He ran his 6.57 in a heat at a meet in Switzerland vs. no big names. He injured himself when running into the protective padding at the end of the race.
It would have been great to see him go head to head with Tortu.

Fabian Olbert of Germany who just turned 19 a few weeks ago has the fastest under 20 time in all of europe. He ran a 6.65 yesterday for yet another new p.b. This
kid as well as Luis Viewig, Deniz Almas and Julian Wagner are all young german sprinters on the rise to fame. There are other sprinters too but these guys really stand out!
I like what's going on in german sprinting! 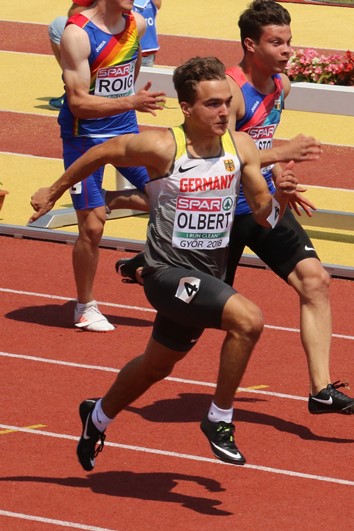 An english sprinter I'm watching closely is Oliver Bromby. He is 21 years of age. Bromby lowered his indoor 60 meters p.b. from a 6.79 last year
to a 6.62 this year. That's a big jump indoors and the kid already has a p.b. in the 100 meters of 10.22! This kid hopefully won't stall out like Craig
Pickering did. Pickering never went faster than 10.13. I would be shocked if Bromby doesn't at least equal that this year or come damn close. Keep
an eye on him guys. He has alot of talent. 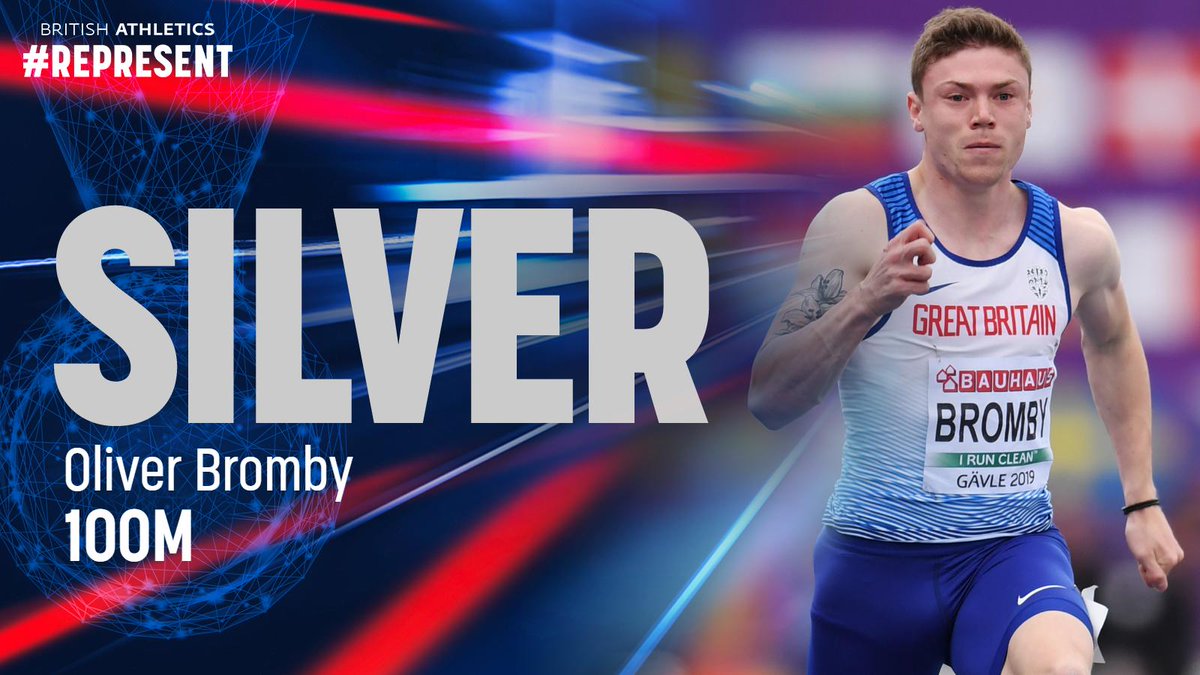 I did like that European meet where Pickering did his (just illegal) 10.08 to finish 2nd to Bolt (Ostrava I think).
Pickering lives with his wife on Queenland's Gold Coast now. I'm not certain if he's going for Australian citizenship

A great time from Kristina Makarennko-Sivkova, 7.09 in 60m.

Also a nice time of 52.18 in the 400m from Shae Anderson a sophomore at UCLA.
Fourth fastest time in NCAA.


This kind of speed is what is needed to go not only sub 11 but maybe even sub 10.90s! She is not eligible to run at the olympics as Russia is banned until the end of 2022. This pisses me off. I feel so bad for many of them as a few got caught and they punished all of them. You won't see that ever happen to Jamaica, the US, Caribean, etc.

This girl could be another Schippers type possibly. She just turned 22 so she will at least be still in her prime going into 2023. It just is horrible as her, Shubenkov and many others have elite talent!
Last edited: Feb 25, 2020
You must log in or register to reply here.