Warhawk_46 said:
Boy, consider how impressive Welker’s finest season was as he worked nearly exclusively out of the slot his whole career. He worked the middle of the field with monster linebacker and safeties trying to take his head off. Wes deserves to be in the HOF.
Click to expand...

I agree with this, Welker had brass balls!!

he also had this classic press conference on the foot fetishized freak Rex Ryan. I think it got him suspended a game by Belichek. “Good little foot soldiers”!!

with 13 games in the book for Kupp in what could end up being a historic 2021 NFL season for him, let’s review exactly how special Kupp’s statistics have been thus far:

Kupp currently sits with 1,489 receiving yards on 113 receptions and 12 touchdown catches. all of these rank first in the NFL, which has Kupp on pace to achieve the rare receiving triple crown accomplishment. the only three players to ever achieve that elite status are Jerry Rice (1990), Sterling Sharpe (1992) and Steve Smith (2005).

Kupp is on pace for 1,947 receiving yards, which would be good for the second-highest season ever and only 17 yards shy of the 1,964 set by Calvin Johnson of the Lions in 2012. in order to break Johnson’s record, Kupp needs to average 119 yards per game. Kupp needs just 292 yards in the final four games to break Isaac Bruce’s 1995 Rams’ single-season receiving record of 1,781 yards.

in terms of receptions, Kupp is on pace for 148 receptions which would be one shy of the 149 passes brought down by Michael Thomas for the Saints two years ago in 2019. Kupp is also only 7 catches away from breaking Isaac Bruce’s single-season Rams’ record of 119 receptions.

for receiving touchdowns, Kupp likely will not set any records. he's on pace to lead the league in touchdown grabs, his pace of 16 touchdowns this season would leave him one shy of the 60-year-old Rams record set by Elroy Hinch in 1951.

Kupp is one of three receivers in NFL history to have 90 yards receiving in nine straight games. The other two receivers on that list are Michael Irvin in 1995 and Kupp’s current teammate, Odell Beckham Jr. in 2014. Kupp also has eight different games with 100 yards receiving and six with over 120 yards.

against the Cardinals, a top-five defense, Kupp produced from every single alignment on the field. Kupp set a new career-high with 13 receptions. according to Next Gen Stats, Kupp caught at least one pass in every pre-snap alignment, which has not been done since Next Gen Stats began tracking this in 2016.

"Men occasionally stumble over the truth, but most of them pick themselves up and hurry off as if nothing ever happened." - Sir Winston Churchill

By all accounts, Kupp is a consummate pro, with exceptional size, speed, hands, route running, quickness, toughness, durability, competitiveness, work ethic, intelligence, coachability, and likeability. The perfect wide receiver that you could design in a lab. This year he has the quarterback, coach, teammates and system in which to maximize his talents and potentially have an all-time great season. We should savor this season much like McCaffrey’s
1000/1000 season. 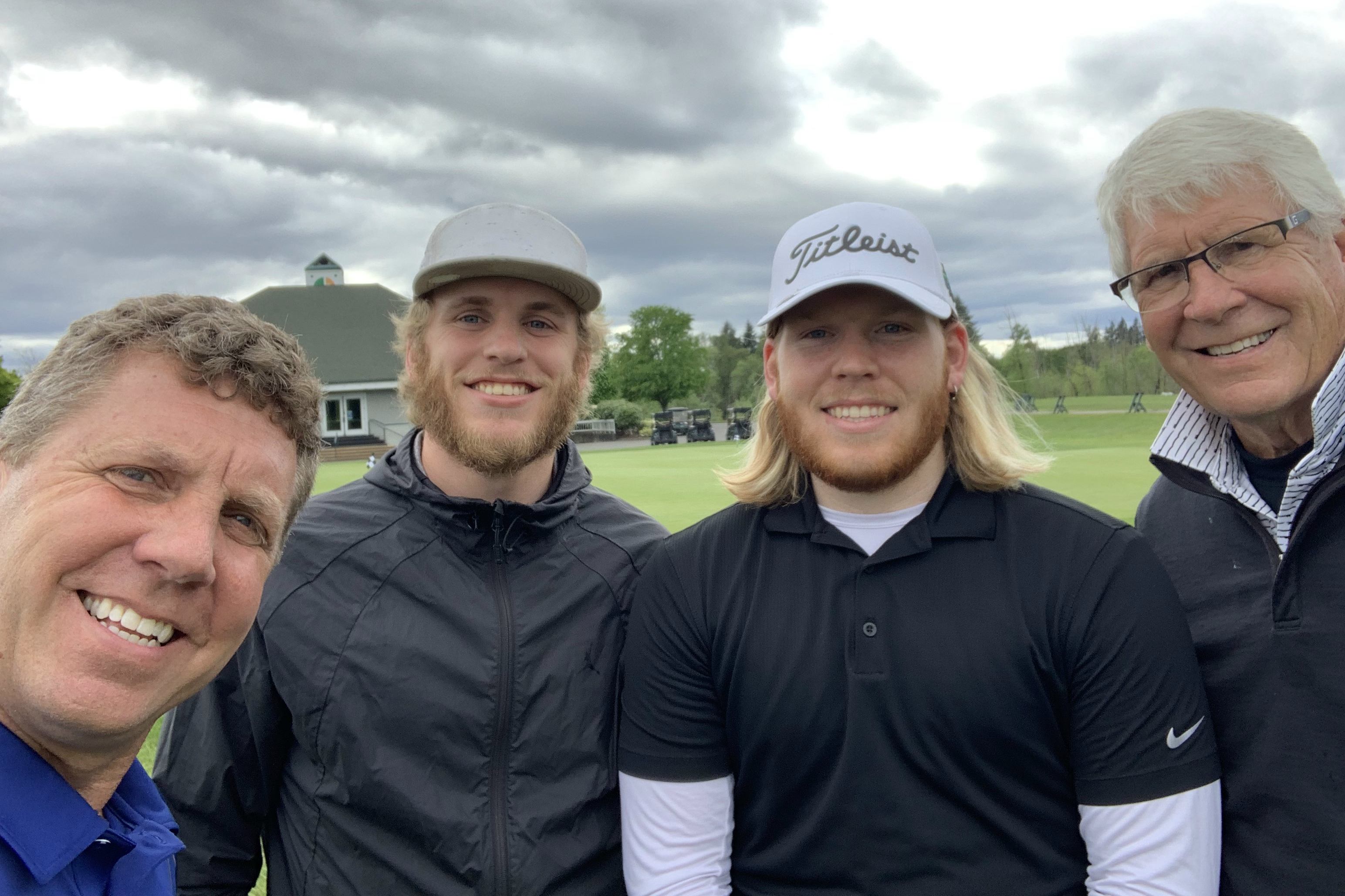 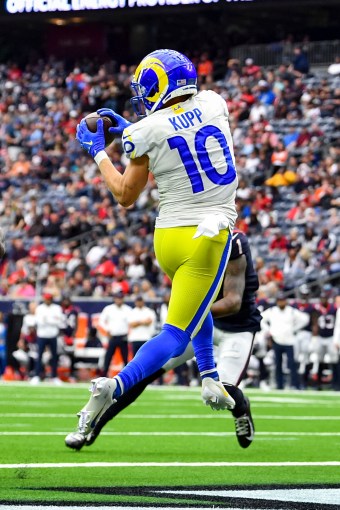 Cooper Kupp after 14 games now has 1625 yards on the season. He just passed the great "Bambi"Lance Alworth who had 1602 yards in the 1965 season. One of
the greatest receivers to ever play the game. He also passed Welker and only Charley Hennigan of our guys has ever had a better single season. He should pass
Hennigan in the next few games but the question remains if he will catch the number one season of all time in Calvin Johnson. Here's hoping that he does! This is
so much fun tracking this incredible season as Kupp continues to lead the NFL in total yards, receptions and in touchdowns by all receivers.

This is a special season to remember for those of us who root for White football players and understand why so few of them are allowed to excel. Reminds me of Drew Bennett's unstoppable season, Jordy Nelson and Wes Welker for a number of years, and other White receivers we've watched over the past 15 or so years. Also, Peyton Hillis in 2010 and Christian McCaffrey before being derailed by injuries the past two seasons.

Kupp came into the league clean shaven but he's taken on more of a mountain man look this season, looks good on him and likely fits his state of mind and determination. Notice too how muted his TD celebrations are, he doesn't jump around and his (mostly White) teammates are dignified as well. If he did prance around after scoring or making a big play it would backfire on him as we'd start reading articles about how disliked he is. He has to act humble and that seems to fit his personality anyway.
American Freedom News
https://americanfreedomnews.us/

Shannon Sharpe admits Kupp is overlooked athletically because of the pigment of his skin. Thank you Captain Obvious.

Not sure this is accurate, but I thought this comment from a random sports board was interesting:

He has beaten his weekly yard total set by the oddsmaker every week except one.

Julio Jones at his peak was set in the uppers 90s. But Kupp’s receptions total is set at 8.5. I don’t think I ever seen anyone with that high a total.
Click to expand...

Cooper Kupp definitely deserves to be in the MVP discussion. We're in a pass happy era and love or hate it, it really bodes well for him. Three games to go. Go Cooooooooooop !!!
"He that believes on Me has everlasting life". Jesus Christ (John 6:47)

Someone here must be able to translate this language:

"The things that threatened me ne'er looked but on my back.
When they shall see the face of Caesar, they are vanishèd."

Ambrose said:
Someone here must be able to translate this language:

I love that! This bimbo who shouldn't even be a sports reporter is probably clueless as to what he's talking about regarding the intricacies of offense versus defenses. Totally classic!
"He that believes on Me has everlasting life". Jesus Christ (John 6:47)

Steve Sailer has mentioned Cooper's outstanding season and the article has been reprinted at Unz Review, which has a large audience. This is a great opportunity for CF supporters to post comments extolling CF and our support of White athletes over the past nearly 20 years. Maybe also comment at Sailer's site if he has one though he mostly buys into the Big Lie about Black athletic supremacy:

I left a mild and casual comment on the unz article. I linked this site and used DOTus so maybe it will make it through moderation.
"He that believes on Me has everlasting life". Jesus Christ (John 6:47)

I shared the article on CF's Gab Page as well as the Larger Sports Group there.

There is no reason Kupp shouldn't be considered a serious top contender for MVP this year. With no starting QB really standing out he is on the verge of breaking all time records with no bad games leading his team to one of the best records in the NFL. I'm convinced he would be the favorite right now if he weren't so darn pale.

Talking to a buddy today and he said something to me that made me laugh then think...why not. Have OBJ chase Kupp in a game of stay away...like CM did with Luke Kuechly a few years back. Be interesting to see if OBJ could actually catch him...

After today’s game, Cooper will need 231 yards in the final 2 games to break the record. With the way he’s playing, it is very possible. Let’s go Kupp!
For here we are not afraid to follow truth wherever it may lead... -Thomas Jefferson

Cooper Kupp now has 1734 yards which puts him in the 7th highest single season receiving yards ever with two games remaining. The great
Charley Hennigan is now only 8 yards ahead of him. It still amazes me that Hennigan did this in 1961! Here is the list so you can add Kupp in 7th.

Well I had hopes that Cooper might be the possible MVP but even though I think he will finish in the top three I don't think he will actually get it. Maybe some of you guys can convince me otherwise, but I think it's going to be Aaron Rodgers going away. Other opinions are welcome as to who you think it will be!
"He that believes on Me has everlasting life". Jesus Christ (John 6:47)

BeyondFedUp said:
Well I had hopes that Cooper might be the possible MVP but even though I think he will finish in the top three I don't think he will actually get it. Maybe some of you guys can convince me otherwise, but I think it's going to be Aaron Rodgers going away. Other opinions are welcome as to who you think it will be!
Click to expand...

My vote would be Cooper Kupp but they don't seem to like to give the MVP to a receiver. Hope I'm wrong. Other than Rodgers I would say Tom Brady. They won the division and
he is leading the NFL in passing yards in his mid 40's. You also have to consider rb Jonathan Taylor with over 1600 yards with 2 games remaining. Even Matthew Stafford
should also be considered with what he has done for the Rams.

BeyondFedUp said:
Well I had hopes that Cooper might be the possible MVP but even though I think he will finish in the top three I don't think he will actually get it. Maybe some of you guys can convince me otherwise, but I think it's going to be Aaron Rodgers going away. Other opinions are welcome as to who you think it will be!
Click to expand...

The way I see it, they'll do anything to avoid giving it to Rodgers after what happened earlier this year. In a just world, it should be him or Kupp, but for better or worse, it looks like Brady is getting it (if the winner was selected today, things could change over the next two weeks).

Now with 1 game to go the media is saying about how the extra game takes away from what he has done. Complete B.S. and they even have Kupp talking about an
asterisk. Yeah the other side wouldn't do that. No asterisk. He is 4th all time after 16 games and should have been higher but Stafford threw 5 interceptions in the last
two games and he fumbled another possesion away. Give back those drives and Kupp already is near or possible has the record. Here is the article.

https://www.espn.com/nfl/story/_/id...iving-records-hold-same-weight-17-game-season
Last edited: Jan 4, 2022
You must log in or register to reply here.